Adding Hips to our Self Image 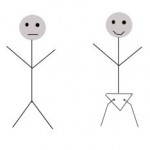 If  you were to draw yourself as a stick figure, would your figure look more like the left or right person?  Moshe Feldenkrais begins his Awareness through Movement Book saying:

Each of us speaks, moves, thinks, and feels in a different way, each according to the image of himself that he has built up over the years.  In order to change our mode of action we must change the image of ourselves that we carry within us.

It is common for me to see people in my practice that would draw the left.  They do not have their pelvis and hips in their self image.  For example, walking is something that their legs do, but there is no involvement of their torso.   It is always thrilling for me to see how modifying their self image to include their pelvis (as in the right stick figure), so improves their walk.  Their walking movement becomes fluid, graceful, and easy; less stress is placed on the knees and hip sockets.

To learn move, sign up for a free Move with Ease Consultation.