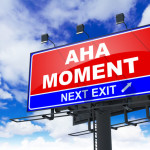 Learning is at the heart of the Feldenkrais Method. A good session has many small and some large “aha” moments.  Recently, I wrote up this example of an “aha” moment as part of my job staffing the IOPS Academy, a 18 month advanced Feldenkrais Training, but thought the readers of this blog would also enjoy it.  (Note the “FPP” refers to the Feldenkrais Practitioner Profile).

In the first IOPS segment, we studied how to notice differences between our client’s left and right side and how to engage our client in a process to bring the quality of ease from the “good” side to the “bad” side. This Saturday, I had a nice experience with this.

D. is an engineer who I have been working with for two years. A few weeks ago, we were discussing his job and his task of improving the speed of his company’s software. I said that performance improvement was a difficult task. He replied that, to start, they were simply trying to see if they could change the performance in any direction. Even slowing the system down would give them some insights.

D. had his left hip replaced last year. After the operation, he no longer experienced deep pain in the hip joint. However, the operation didn’t change his pattern of movement and he still overuses his hip flexors causing them to be very tight and painful. D. came into Saturday’s session in significant pain. About half way into the session, he was lying on his back with his knees up and both feet standing. I moved his left knee left and right, noticing the quality. The range was ok; the fluidity was ok; but I felt like I was pushing the leg through molasses. (FPP 1.1 “Perceiving extraneous efforts and how they interfere with the intended actions” )

I asked D. to notice the “thick” quality. (FPP 1.1 “encourage the client to engage in ongoing self-reflection”, “clarify for the client how he is moving”)

I then did the same movement on D’s right leg. On the right side, the movement was easy. So, I asked him if he could make the right (“good”) leg be like the left leg. (FPP 1.1 “Ask questions that invite curiosity”)

For his first attempt, D. strongly activated the hip flexors and the result was that I could not move the right leg at all. On his second try though, he got the molasses effect. I was actually surprised at how good of an imitation it was. It had that same gooey, thick feel. I then asked him to let it go and move the right leg back and forth easily. We did this a few times so that he could sense and become quite clear on what he had to do to create the molasses effect and how to let it go. When we returned to the left leg, to his surprise, he was able to “let go” and move the left leg freely.