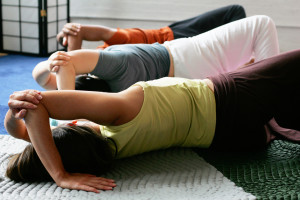 Andrew Heffernan wrote a fantastic article in the Experience Life Magazine in November of 2009 called The Feldenkrais Fix.  It begins by describing the experience of John Dumas:

In 1999, John Dumas, a 52-year-old writer and karate enthusiast from Los Angeles, sat in a doctor’s office and heard four words no active person ever wants to hear: “You’ve blown your ACL.”

John didn’t want surgery, so he decided to try the Feldenkrais Method.  After three months, he returned to karate.

A few years later, Dumas found himself in the hospital with an injury to his opposite knee. For comparison’s sake, the doctor performed a “drawer” test — which checks the integrity of the ACL — on Dumas’s previously rehabbed knee. “See, this is how a healthy knee should respond to this test,” the doctor told him, unaware of the prior injury. “There’s no give in your ACL.”

“But I don’t have an ACL on that knee,” Dumas protested.

Skeptical, the doctor repeated the test and got the same result. Only when he saw Dumas’s prior injury on an MRI was he willing to believe that the knee — which seemed to function perfectly — was missing its ACL.

Dumas’s ligament hadn’t magically regrown. Rather, through a combination of physical therapy and Feldenkrais lessons, his body had relearned how to move. His remaining muscles and ligaments were taking up the slack for the missing ACL so effectively that he fooled the doctor’s test. Twice.

The article goes on to describe the Feldenkrais Method.  I highly recommend it.  Read more